Welcome to the Christian Answer Man site! This is an on-line ministry whose purpose is to provide information about non-Christian cults and aberrational fringe Christian ministries. The Jimmy Swaggart scandal and the false teachings of Jimmy Swaggart Ministries is covered extensively. On these pages you find a wide array of information on various topics from commentary on current events, to ghosts, to UFOs, to bigfoot, to cults, and beyond.  Within these pages you will find explanations from a Christian perspective as well as input and discussion from numerous readers. Read and enjoy – you are invited to join the discussion!

One of the main purposes of this site is to expose the false teachings of various ministries and cults, including the erroneous claims of Jimmy Swaggart Ministries, which has its roots in the Jimmy Swaggart scandal of the 1980s. The objective of this site is to assist people seeking information and to help those who are entangled in a cult. The goal is to follow the admonition of Holy Scripture to ever be, “holding fast the faithful word which is in accordance with the teaching, so that he will be able both to exhort in sound doctrine and to refute those who contradict.” (Titus 1:9)

Why These Things Matter

Incorrect doctrine obstructs and obfuscates the path to God. Thus this site intends to “speak the truth in love” and help all come to know “the way of God more accurately.”

In the words of Reverend D.M. Canright, 1889, “To criticize, expose and condemn others is not a pleasant task; but when religious teachers enthrone error, and mislead honest people, silence would be unkind and censurable.”

Your host is Mark Swarbrick, Pastor Emeritus. He studied at the the University of Illinois’ Institute of Aviation in the Commercial Pilot Training Program. Swarbrick received his diploma in Ministerial Studies from the Berean School of the Bible, Global University, an accredited college affiliated with the Assemblies of God. He was ordained by the Assemblies of God and has held positions as a worship leader, youth pastor, associate pastor and senior pastor.

Swarbrick was an instructor at Arizona Automotive Institute and has written curriculum for Gateway Community College in Phoenix. He is currently owner and founder of Swarbrick Software Inc where he has developed computer network failover systems.

Swarbrick is a published author of over a dozen books, both in the area of Information Technology as well as theology. With a heart towards helping those who have been ensnared by the cults he feels impelled to contribute to the voice of the Church in presenting Biblical doctrines as evidenced in orthodox historic Christianity.

How To Use This Site

The menu on the left will take you to pages that deal with particular cults or ministries. (If you are on a smart phone, click the three horizontal lines in the top left to drop down the menu.) Readers are encouraged to place comments. These are monitored daily and any theological questions will be answered there. For questions or help of a more personal nature, readers can send email to Pastor-Mark@ChristianAnserMan.com. 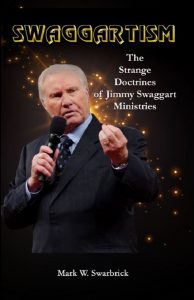