It is wise to be aware of how subtle, deceptive, and dangerous cults are, as the following true story reveals:

A minister was ordained by the Independent Assemblies of God and later ordained by the Disciples of Christ denomination. He was loved by his congregation and as their church grew, that church became known for its kindness to all. Outreach programs fed the poor, housed the homeless, rehabilitated drug addicts and criminals, and took loving care of the elderly. The church was also color blind. Black and white worshiped together in harmony.

And then there were the miracles. When the pastor laid hands on the sick, they were dramatically healed. Countless people were cured of cancer. Some of the cancer healings were certified by medical doctors.

The pastor was friends not only with the downtrodden and poor but also the rich and powerful. He treated all the same. The wife of the President of the United States visited his church and counted him as a friend. His friends also included the Mayor of San Francisco, the vice president of the United States, the California governor and the lieutenant governor. The mayor appointed the pastor to preside on the San Francisco Human Rights Commission and to head the San Francisco Housing Authority.

A testimonial of one of the church members exemplifies how the congregation felt about their pastor:

“A man of absolutely unimpeachable character, one who is continually involving himself in the practice of doing good for others, who gives and gives and gives of himself of his strength, and time, very often whole nights are spent in wrestling with some unfortunate’s problem, and seldom indeed is he fortunate enough to acquire two whole unbroken hours of untroubled rest a night. Far from doing spite to anyone or enriching himself at other’s expense, he is continually outgoing with deeds of kindness and love which very often necessitates a huge outlay of cash which is cheerfully given in any instance of need to friend or foe.”

There were, of course, some detractors. Some had left the church, saying that the teaching was beginning to stray away from the truth of Scripture, but the faithful stayed and denounced the malcontents as mere troublemakers. Those who dared to speak evil of God’s anointed would risk engendering God’s judgment, it was declared. “Touch not God’s anointed” they warned. The faithful followers were not swayed by the complainers. They knew their pastor was a dear man of God and their church was anointed with power and was changing lives. There were rumors of sexual sins, but the faithful felt confident those were nothing but devilish lies. 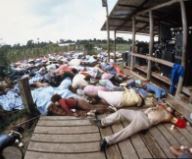 Their devotion to him was complete. They followed him to the South American country of Guyana, to their agricultural mission there. Their pastor, who now called himself a prophet of God, said it was God’s will to go there. And there, in Jonestown, nearly a thousand of them listened to their man of God, Pastor Jim Jones, as he told them all to drink the Kool-Aid laced with deadly cyanide poison. They obeyed, drank the cool-aid, and all 909 of them – men, women and children – suffered agonizing deaths.

Deborah Layton was one of the few survivors to escape the Jonestown massacre. Anyone who thinks they might be in a cult should read her story. In her book Seductive Poison, she shares wisdom that bears heeding:

“People do not normally join cults that will kill them. It is usually only gradually that a group turns into or reveals itself as a cult, becomes malignant, but by then it is often too late…There are essential warning signs early on. Our alarm signals ought to go off as soon as someone tells us their way is the only right way.”

If a church refuses to answer specific questions about practices, doctrines or allegations, and instead gets defensive or angry, find another church that is willing to be open about what they do and teach. If a sect has a history of threatening people with “God’s judgment” if anything negative is said about their leader, or if they make threats when people question their group, don’t have anything more to do with them. Consider them a dangerous cult.

Some cults have money, power, and property. They may be active in community affairs. Some members may be reputable members of the community. Do not take that as proof that they are a legitimate Christian church. Remember, even the wife of a U.S. president counted Jim Jones as a friend. You must look at all the factors.

If you hear how nice and friendly a group is, how much they all love each other, and how anointed their leader is, do not take that as proof of their legitimacy. If they put their pastor up on a pedestal and consider him some sort of prophet or apostle, be extra wary.

Check their statement of faith on their website. Compare it to the Bible. If they don’t have a statement of faith, consider that strike one. Then check with your local ministerial association. Are they a member? If not, if they don’t associate with other Christian churches, strike two. Then search a bit on the Internet. If you hear of abuse and questionable business activities and controversies, strike three – look somewhere else for Christian fellowship. And if you are in a church like that – run! If they say that you are lost if you leave, run even faster!

If you think you might be in a cult, there are some things you should know. First of all, God will help you. He will not judge you for leaving. He will help you. Salvation is not in a particular church. It is in Jesus Christ and Him alone.

Secondly, know this: There are many good churches filled with good Christian folks who will do all they can to help you. You are not alone. If you have been told that all other churches are apostate, you have been lied to by a false prophet who is using fear to keep you from leaving. Don’t believe a lie that is designed to keep you in bondage.

Third, consider reaching out to some pastors of Christian churches in your area. They will be happy to talk with you. They can give you insights into understanding scriptures that may have been fed to you with a twisted interpretation. There are also cult-watch websites that specialize in helping people that have been caught up in a cult (This is one of them). Reach out to one and ask questions. They will not judge you but will be eager to help you with doctrinal questions.

Fourth, if you think you might be in a cult – pray! God will hear you and help you. God loves you! If you have been deceived into thinking God is hard and cruel and is someone who insists you have to earn your salvation, you have been fed lies. God’s salvation cannot be earned. It is a free gift given to all who put their faith in Jesus Christ. He wants to set you free and fill you with joy. Trust in God, not in man.

“A bruised reed he will not break, and a smoldering wick he will not quench.” (Matthew 12:20)