It is clear, after the events of the past couple days, that we no longer live in a free country. We live in a post constitutional republic where the rule of law is ignored by the ruling Democratic Party. Never before in the history of America has the home of a former president been raided by the FBI. Just as Hitler and the NAZI regime used the brown shirts, and then later the SS, to silence their political rivals, so also the Biden regime has turned the FBI into the military arm of the Democratic Party, using them just as they used the Ku Klux Klan to murder the opposition during reconstruction at the end of the Civil War.

“This is one of the darkest days in American history: the day our Government, originally created by the people, turned against us. This illegitimate, corrupt Regime hates America and has weaponized the entirety of the Federal Government to take down President Donald Trump.  Our Government is rotten to the core. We must fire the Federal Government. As Governor, I will fight these Tyrants with every fiber of my being. America—dark days lie ahead for us. May God protect us and save our Country.”

I stand with president Trump. I voted for Cruz in the primary, but supported Trump during the general election. He surprised me. He was a far better president than I expected. His record now stands on a par with Ronald Reagan and Abraham Lincoln. But today he needs our prayers more than ever. I encourage everyone to take a moment each day and pray for President Trump. There is no telling what the Democratic Party will try to do next. He needs supernatural protection from the forces of evil turned loose against him.

While in office, President Trump surrounded himself with many born-again Christians and took actions that helped both Israel and the Christian Church. One of his first executive orders was to stop the use of the Johnson Amendment to stop the silencing of pastors who spoke about current issues such as abortion and homosexuality.

While he wasn’t a perfect president, he kept all his campaign promises and turned out to be an excellent president. While I didn’t always appreciate his sometimes bellicose manner, I have come to see the evil in the Democratic Party and the fake news media that he was up against. An abrasive warrior was exactly what was needed to combat the swamp. President Trump has an undeniable and unprecedented record of achievement. Here is just a partial list of President Trump’s accomplishments, which he achieved even before he finished his term.

In spite of all the good he did for America, the Democratic Party has hated on President Trump as much as they did on Abraham Lincoln prior to the outbreak of the Civil War.  The Democrats managed to steal the 2020 election (See the documentary 2000 Mules for proof). We can only hope and pray we get Trump back in 2024 and that they are not able to steal that election.

Read my book:  Hidden History: The Real Story of the Democratic Party

Find out what the Democrats have been up to for the past 150 years!

Available in Paperback and Kindle eBook – 200 pages of documented facts! 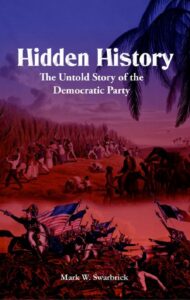 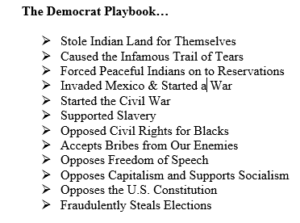 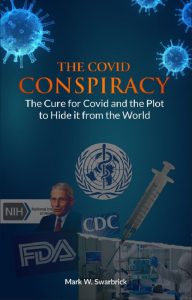