“There is no Hell,” said the Pope, according to a news reporter who met privately with the Pope. The Vatican denies that the Pope said this, saying that what the reporter says is merely “the fruit of his reconstruction.” But according to the reporter, the Pope’s words were: “Those who do not repent, and cannot therefore be forgiven, disappear. There is no hell, there is the disappearance of sinful souls.“

This can be easily cleared up. All the Pontiff has to do is make a public statement that he didn’t say any such heresy and that he does believe in Hell. However, he has not yet done so. We are still waiting. Perhaps he did not say it. But on a doctrine so essential, why leave it to others to deny the statement? I know that if the leader of my church had been alleged to say something of that nature, I would expect him to quickly and publicly set the record straight himself with an emphatic denial from his own lips. If he did not, I would be looking for a new church rather quickly.

This would not be the first time this Pope has said something controversial.  In 2013 the Pope said, “If someone is gay and he searches for the Lord and has good will, who am I to judge?” Although the Pope acknowledges that he said those words, he walked it back, saying he only meant that “these people should be treated with delicacy and not be marginalized,” and that “When we confess our sins and we truly say, ‘I have sinned in this,’ the Lord forgets… If someone is gay and is searching for the Lord and has good will, then who am I to judge him?” 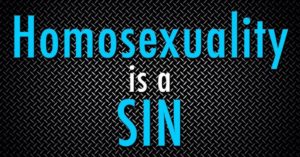 Okay. I’ll go along with that. However, considering there are powerful people within Catholicism on record as pushing portions of the LGBT agenda, I suggest it would be much better if he had forthrightly said that the Bible clearly says that homosexuality is a sin, rather than dancing around the issue. If someone is a homosexual, then they need to turn away from that sin and be sorry for it. That’s called repentance and it is a prerequisite to receiving the Lord’s forgiveness. It is an integral part of accepting Christ and being born again and being a part of the Church.

If a homosexual comes to church then of course you want to treat them with Christian love. However, that includes telling them plainly that unless they repent and turn from their sin and choose to obey Christ and follow Him they are in danger of Hell’s fire. It is that direct expression of truth that is lacking, not just in the Catholic world, but in many mainline denominations as well. Many are caving to political correctness and worldly pressure and sacrificing the truth of God’s word in the process, to the endangerment of souls.

Lest some think I am only critical of other churches, I must say that I wonder if I am seeing this tendency in my own local church and I am watching it closely and suspiciously. Jude 1:23 cautions us, “save others, snatching them out of the fire; and on some have mercy with fear, hating even the garment polluted by the flesh.”

I saw this very same gradual slide into sin within the Church I grew up in, The Evangelical Lutheran Church in America (ELCA). They danced around the issue of whether or not homosexuality was a sin, until finally they chose to allow homosexuals to be ministers and pastor churches, claiming that “Paul’s evaluation of such behavior was reflective of his cultural context and not the timeless design of God’s creation.”

To my father’s credit, who was ordained with the ELCA, he left that church when the leadership did this, and joined a Lutheran group that followed the scripture more closely.

Today the leadership of the ELCA has departed from the faith, not only by putting a stamp of approval on sexual deviancy, but also by denying the accuracy and infallibility of scripture and repudiating the truth that people need to accept Christ to be saved.

In their official publication, The Lutheran, they malign the question of “accepting Christ” in order to be saved, saying, “for Lutherans the question makes no sense…we are saved…not by any action on our part.”[i]

I wrote to the editor and expressed to him the Biblical truth that repentance and faith are certainly actions on our part that are necessary for salvation. The editor of The Lutheran wrote back, disagreeing, saying that people don’t need to do anything, such as accepting Christ, for salvation.

In spite of such signs of apostasy, I hasten to add that there are many good Christians in both Catholic as well as main-line Protestant churches, for it is not our church that saves us, it is our relationship with Christ through repentance and faith in Him. That is what saves us. There is not any church that can save you. That is done by Christ alone.

Nevertheless, there is a clear tendency for the leadership of many Christian churches to stray from the faith. Each Christian must examine these things closely and ask if the Holy Spirit is confronting them with the words of scripture, “Therefore, “Come out from them and be separate, says the Lord. Touch no unclean thing, and I will receive you.” and “Come out of her, my people,’ so that you will not share in her sins…” (2 Co 6:17) & Rev 18:4). 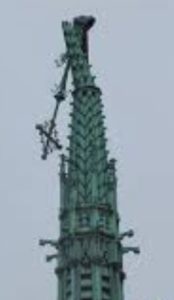 At about the same time that the Pope was allegedly denying there was a Hell, chunks of ceiling plaster rained down on worshippers at St. Peter’s Basilica in Vatican City. Some say it was a sign of God’s displeasure.

Something similar happened with the Lutheran Church (ELCA) in 2009 when church leaders met in Minneapolis to decide to ordain homosexuals. Their meeting was brought to a halt by an unexpected tornado that touched down at their exact location and ripped the steeple off their church.

A spokesperson for the ELCA said it was a wind of the Holy Spirit showing God’s approval. I would have to disagree. I think if God violently rips the steeple off your church while you are approving the sin of homosexuality, you might want to consider that He is trying to send you an entirely different message – that he is angry with your current course of action.

The Great Apostasy – An End-Time Prophecy

Scripture tells us not be troubled by any message which says the “day of the Lord” (the Tribulation) has come, for it says “it will not come unless the apostasy comes first.” (2 Thess 2:1-3) So before the Tribulation begins there will be a great falling away from the faith within the Christian Church. I think that what we are seeing today is that apostasy, or at least the beginning of it.

That means the Tribulation is not far off, and if that be the case, the Rapture of the Church is at hand, for that also must transpire before the Tribulation. Though we decry what is happening in many corners of the Christian world, we can look up, knowing that our redemption draweth nigh! Jesus is coming soon! “Behold, I come quickly; and my reward is with me…” (Rev 22:12) Come Lord Jesus!

[i] Lutheran quotes are from Study Guide Lutheranism 101 June, 2006, Page 12 and from The Lutheran magazine