America was founded primarily by Christians and its government was uniquely established upon godly principles. This is something that had never been done before. In past times governments were founded upon a dynasty, a ruling class, or by a conquering country. The rights of the people were declared by the government to emanate from them. The people existed for the sake of the government. They could only do, say, worship or live as the government allowed or disallowed. 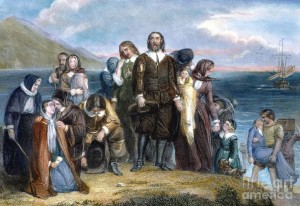 America was founded largely by people who fled religious persecution in England, where any deviation from the Church of England’s religious dogma was cruelly persecuted by the government. Those who had become born-again Christians were mistreated and thus they fled to America. At its very conception, America was a place where people could worship the Lord Jesus Christ as their conscience directed them.

Over a hundred years later when our Declaration of Independence, Constitution and Bill of Rights were drafted, they laid out a form of government based upon Christian principles and ideas. What exactly are these principles in our founding documents that make America unique?

Recognition of the Bible’s pronouncements concerning man’s fallen nature is also reflected in the American economy. We have a capitalist economy rather than communism. In 1623 at the Plymouth Colony socialism was briefly tried. All things were held in common. It was a disaster. No one worked hard, since there was no incentive to do so. People just didn’t naturally do the right thing. Some didn’t work at all.

This led to famine. Some sold their clothes and bed coverings for food while others “became servants to the Indians,” cutting wood and fetching water in exchange for “a capful of corn.” Many died of starvation. 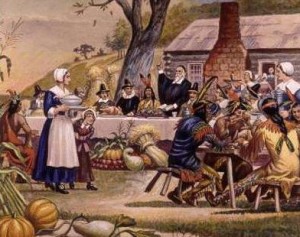 The leaders recorded, “This had very good success…for it made all hands very industrious.” There was such prosperity at harvest time that they had a feast and gave thanks to God – the first Thanksgiving. The moral of the story is that a capitalist society recognizes the scriptural principle that economic policy works best when taking into account what scripture tells us about the nature of men, that they are fallen and will have their own self-interest at heart.

The Source of American Founding Principles 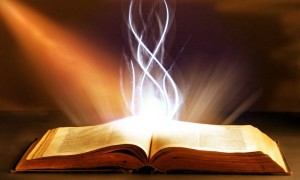 All of these concepts – that God grants freedom to individuals and that he wants them to flourish, to enjoy life, liberty and happiness, that all men are equal, that God cares about the rights of all and is sovereign over nations, that mankind is fallen and needs accountability – all of these ideas are straight out of the Bible. They flow from Christianity. That is plain to anyone familiar with the scriptures. You don’t find these concepts taught in other religions.

Only in Christianity do we find a loving God who is involved in the affairs of man and who cares about the single individual and is concerned for the rights of all. Visit any country where pagan religions are practiced, and what do you find? Tyranny, oppression, communism, poverty, no freedom, and all manner of cruel hardship. It is in Christian lands where you find freedom, hope, prosperity and justice. Yes indeed, all that is good about America comes from our Christian roots.

Religious freedom is the hallmark of American exceptionalism. We were founded by people seeking it. It was put into our Bill of Rights as part of the First 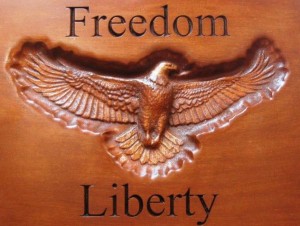 “Congress shall make no law respecting an establishment of religion, or prohibiting the free exercise thereof…”

That sentence is probably the most misunderstood statement in our founding documents, simply because liberals wish to misconstrue it. It was not intended to put a wall between church and state as the god-haters pretend. Rather the intention was to allow for people and communities to worship God as they saw fit.

When the Bill of Rights was ratified at the end of the 18th century, there were a number of states which had a state church. Connecticut for example was Congregationalist. The intent of the amendment was to ensure that the federal government did not interfere with these established state churches. Although in course of time this changed, it goes to show that the intent of the amendment was not to prevent communities or states from declaring their religious preference or practices. It was to prevent the federal government from telling local government what they chose to establish regarding religious observance. The First Amendment, when it was written, was only intended to place limits upon the federal government, not local government.

To prevent a community of people from declaring their Christian heritage, or to stop a community from choosing to have prayer in their schools, is a flagrant violation of the first amendment, which guarantees that the federal government will not interfere with the free exercise of religion.

A Lesson from the Indians 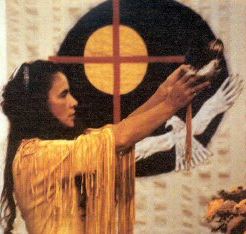 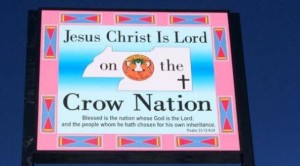 If you travel I-90 in Montana through the Crow Indian Reservation you will see a large billboard proclaiming that “Jesus Christ is Lord on the Crow Nation.” This is completely in line with the U.S. Constitution, despite what liberals say. If the federal government ordered them to put it up or to take it down, that would be a violation of constitutional law, but for any local government to do so is perfectly legal.

Of course, if any city were to do something similar it would immediately be challenged by the liberals, law suits filed and liberal judges would abridge the rights of the people. So why don’t the liberals go after these Indians? I’ll tell you why. It’s because everyone knows the Indians would not cave. They would refuse to take down their sign or change their resolution. No matter what illegal move the courts made they would all band together, resist and fight for their constitutional right to the free exercise of religion.

The problem is that the average town would never be that cohesive and the liberals know it and take advantage of it. The moral of the story is that it’s time we take a lesson from the native Indians and learn to stand up for our God-given rights and stop letting the federal government take them away.

The Blessings of God

The blessings of God upon a nation come from God. America has been blessed like no other nation in history. To this we can give thanks to Almighty God. As ‘one nation under God’ we acknowledge this and it is only the ignorant liberal atheist who does not comprehend it.

Again, we can take heed to something else the Crow Nation has done. They adopted another resolution which states:

“Whereas, according to…the Holy Bible…the words of the Creator to the nation of Israel…‘I will bless them that bless thee, and curse them that curseth thee, and in thee shall all the families of the earth be blessed.’ Now, therefore, be it hereby resolved by the executive branch and the legislature in regular session…The official policy of the Crow tribe of Indians shall be to support the State of Israel, especially in its efforts to maintain economic, territorial and political integrity…the Crow Tribal Executive Branch shall take care to ensure that an official flag of the State of Israel is flown at the Veteran’s Park in Crow Agency as a monument to the official policy of the Crow Tribe…” 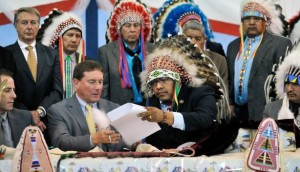 The Crow Nation has 17.1 billion tons of coal reserves. Now that President Trump has ended Obama’s inhumane and senseless attack on the coal industry, the Crow Nation was able to sign an agreement with a Wyoming mining company to mine up to 1.4 billion tons of coal on the Crow Nation. That’s more coal than is presently consumed in the US. Millions of dollars are now flowing to the Crow Nation. Can there be any doubt that this is a blessing of God for their righteous stance? Prosperity is coming to the Crow People because they have honored the Lord and Israel. The blessings America received are now being enjoyed by these native Indians.

John Adams said, “Our Constitution was made only for a moral and religious people. It is wholly inadequate to the government of any other.” It goes without saying that America is falling away from its foundation of faith and righteousness, the very characteristics that brought America freedom and prosperity. We lose our Christian character at the peril of our liberty and prosperity. Our founding documents are unique and wonderful, but without righteousness they are only paper.

Today we are shocked at the liberal’s animosity to all things good and wholesome about America. They refuse to stand for the national anthem and pour out their vitriol over the flag and our Constitution. Why do liberals hate America so? Because America has stood for God and righteousness, and they hate both. That’s why Obama wanted “to fundamentally change America.”

Jesus said, “The world…hates me because I testify that its works are evil.” Liberals hate a righteous America for the same reason. They don’t want anyone or anything telling them that they will give account before God on judgment day for murdering their babies. They don’t want to hear that homosexuals that don’t repent will be thrown in the lake of fire. They don’t want to submit to law and order, as the scriptures enjoin, so they burn and pillage and blame the police when their actions bring chaos.

The liberals are in the minority. We, the moral majority, need to refuse to let anyone shut us up. We need to stand in solidarity like Indians on a reservation and not tolerate having our religious freedoms abridged. We must, as Jesus taught, let our light shine and not put it under a bushel.

Apathy is our greatest enemy. Plato said, “The penalty good men pay for indifference to public affairs is to be ruled by evil men.” How true that is. Christians, more than any, should be involved in politics, and the preacher even more so. And as Albert Einstein said most succinctly, “The world is in greater peril from those who tolerate or encourage evil than from those who actually commit it.” True is the maxim: “All that is necessary for the triumph of evil is that good men do nothing.” 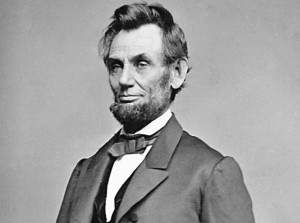 We must all be preachers in our own way and call America back to godliness. We must call America back to the Bible. Abraham Lincoln, speaking of the Holy Bible said, “In regard to this Great Book, I have but to say, it is the best gift God has given to man. All the good the Savior gave to the world was communicated through this book. But for it we could not know right from wrong. All things most desirable for man’s welfare, here and hereafter, are to be found portrayed in it.”[1]

President Lincoln went on to espouse those things that would help America through troubles: “Intelligence, patriotism, Christianity, and a firm reliance on Him, who has never yet forsaken this favored land, are still competent to adjust, in the best way, all our present difficulty.”[2]

At Gettysburg Lincoln said, “Now we are engaged in a great civil war, testing whether that nation, or any nation so conceived, and so dedicated, can long endure…” Today we are in another kind of war. A spiritual war wherein Satan and his liberal minions would steal out from under us the righteousness of our nation, that which is the very underpinnings of our liberty. 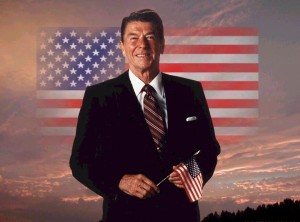 I close with a warning given years ago by another of our great presidents. Let us take heed.

“Freedom is never more than one generation away from extinction. We didn’t pass it to our children in the bloodstream. It must be fought for, protected, and handed on for them to do the same, or one day we will spend our sunset years telling our children and our children’s children what it was once like in the United States where men were free.” – President Ronald Reagan

[1]  Reply to Loyal Colored People of Baltimore upon Presentation of a Bible on September 7, 1864