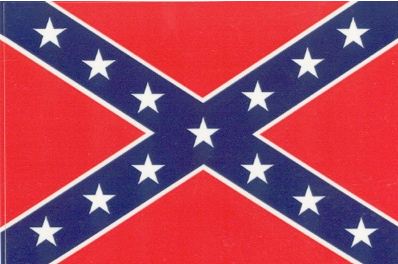 All this political correct nonsense over the Confederate flag is ridiculous. The liberals have their feelings hurt and they are blathering on about how it represents slavery. Poppycock and balderdash I say! They reveal their own ignorance of history. Here are the facts:

Slavery was legal in America with the blessing of the federal government for 87 years. So should we take down the American flag also, saying it is racist? Britain as well had slavery. So also the Dutch, and the list goes on. Should we denounce their flags also? The fact is that the battle flag of the South no more represents slavery than any other flag.

Although the Civil War was instigated over the question of slavery, the majority of Confederate troops were not slave owners and did not consider that they were fighting for slavery. They felt that the federal government was exerting excessive control over the states and that their sovereign state was being invaded by a federal government grown too large and powerful. (sound familiar?) If you asked the average Confederate soldier what he was fighting for he would have replied that he was fighting for his rights, for freedom, and that he was defending his homeland against invasion. Many southerners fought because they had no choice. They were drafted and they did their best to do their duty for their country.

Furthermore ask any modern soldier that has been to war. They will tell  you that in the heat of battle, they are fighting, not for a political cause, but for the lives of their brothers in arms. They fight valiantly, to the point of laying down their lives, for the men next to them. The soldiers of the Confederacy were no different, acting with courageous abandon for their friends, country and home. General Lee was the South’s greatest commander, yet he himself did not fight for slavery. He was a very devout Christian and a godly man. He was so well respected in the North that he was offered command of the northern armies. He declined, stating that he could not raise his sword against his own country (meaning Virginia). General Lee freed all his slaves at the beginning of the war, but some chose to remain with him. General Lee felt it was a mistake for the South to succeed from the Union, but he also felt he had to defend Virginia against Northern incursion.

There was a great revival that swept through the camps of both Northern and Southern forces during that terrible time. Bible studies every evening were commonplace. Many of the Southern commanders were devout Christians and encouraged Christian worship on Sundays. These men fought for the South because they believed they were doing the right thing. And, except for the slavery question, the South had a point. In fact, if half your income was taken by the federal government, as it is now, the South would have rebelled in spite of the slavery issue. Indeed, all of the states of the Union would have rebelled. In point of fact, every state in the U.S, both north and south, at that time, would have left the Union, and fought Washington if necessary to do so, if the federal government sanctioned homosexual perversion and the killing of unborn babies, as it does today. Our own Declaration of Independence makes clear that rebellion is proper if the current government goes too far astray. I am not saying the South was in the right. Slavery was wrong, however slavery was not the only issue and many in the south were fighting for issues that had nothing to do with slavery.

So you see, the battle flag of the Army of Northern Virginia did not represent slavery. It represented decent Americans who courageously fought for the defense of their homeland, believing in their hearts that they were doing right and that God was on their side. And He probably would have been if it  had not been for slavery.

Thus the battle flag of the South represents American courage and when it is flown today it commemorates the bravery and sacrifice made by men (some of whom were black) who fought for and with each other for ideals larger than themselves. To denigrate that flag is to insult the heritage of those in the South whose ancestors fought valiantly for their homeland. It is out of the struggle of the Civil War that people of the North and South all came together as a better America and the battle flag of the south is as much a part of that heritage as the flag of the North.

There are some racist crazy nuts who think the battle flag of the Army of Northern Virginia is the flag of the Confederacy and think mistakenly that it represents racism, slavery and rebellion, and wanting to associate themselves with anarchy, use that flag. However their ignorance does not lend veracity to their false beliefs. They are wrong and ignorant. That should have no effect or influence upon the honor, integrity and valor of those who struggled and died and gave their lives in that last full measure of devotion.

For those who want to quarrel over a flag I say: The war has been over for 150 years. Let it go already. I close with the words of Abraham Lincoln, who at the end of the war, in his second inaugural address had this to say concerning how we are to forget the divisiveness of the war while holding on to those virtues which could be found in both the north and the south and thus honor all those who died in that terrible struggle:

“Both read the same Bible and pray to the same God, and each invokes His aid against the other…the prayers of both could not be answered. That of neither has been answered fully. The Almighty has His own purposes…with malice toward none, with charity for all, with firmness in the right as God gives us to see the right, let us strive on to finish the work we are in, to bind up the nation’s wounds, to care for him who shall have borne the battle and for his widow and his orphan, to do all which may achieve and cherish a just and lasting peace among ourselves and with all nations.” —  Abraham Lincoln