Jesse Morris has asked me to post his testimony of his experience as a child member of The Church of Jesus Christ Forever of Oregon, Illinois. He had posted some of it in the past on Facebook, but Facebook decided that he should not be allowed to tell what happened to him. They deleted his posts and cancelled his Facebook account. It is suspected that multiple members of the church which he escaped from had its members continually flagging his posts in order to get them taken down. Jesse has asked me to post his account on my website where Facebook cannot delete it. In this post Jesse reveals more details than he has previously.

It is my understanding that approximately a dozen people have alleged that they were abused as a direct result of the teachings of The Church of Jesus Christ Forever. Some have told me they want to move on with their lives and not deal with the past, which is understandable. Others say that they want the public to know what they suffered and who caused it. They have told me that they are concerned for children still in the church and they want accountability to those who promoted the teaching that led to the abuse, which they say happened as a direct result of the church’s doctrines.

This article contains the testimony of Jesse Morris, who was raised in The Church of Jesus Christ Forever. These things happened long ago. Many of those who allege abuse are scattered to various states of the country. Jesse is now an adult with a family of his own. It is not known if the police can do anything because of the statute of limitations on these alleged offenses.

Before I present Jesse’s testimony, I want to say this: What you shall read may make your blood boil. The abuse alleged is horrendous. Since the issue is inflammatory, I urge everyone to leave the matter in the hands of the authorities. Stay away from the church property. Make no verbal threats on social media against anyone. While these people have strange doctrines, they have a right to freedom of religion, the same as anyone else. But the public also has a right to their opinion and the freedom of speech which gives everyone the right to express their view. Fortunately, there is no statute of limitations on public opinion.

I encourage everyone to give support to those brave enough to come forward and share their stories. It is important that city leaders, law enforcement agencies, and child protective services be made aware of the allegations. Hopefully, if enough people bring it to their attention, they will be vigilant and eventually sort it out.

Before we get into what Jesse has to say, I want to point out that there are several people who are alleging abuse. I want to mention just a few of them, for what they have to say lends weight and credence to Jesse’s words.

The following Facebook post was made by a teacher in the public school system of Oregon, Illinois. She came in contact with several kids whose parents belonged to The Church of Jesus Christ Forever. For clarity sake, let me explain that the church has aliases. It is also referred to as The Perfect Church, and as The Rose. 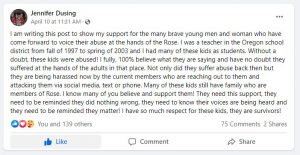 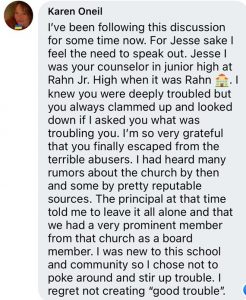 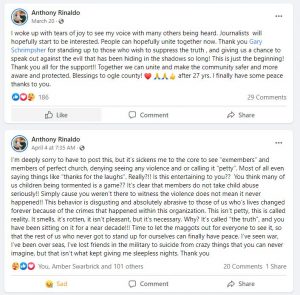 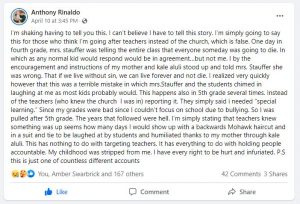 What follows are the words of Jesse Morris, whose parents were members of The Church of Jesus Christ Forever…

The church used specific scriptures to justify both the physical and psychological abuse they dealt. One of these scriptures was Matthew 17:21, “Howbeit, this kind goeth not out but by prayer and fasting.” This scripture was used out of context by the church when pressuring a person to fast.

Another verse that was applied was Proverbs 13:24 “He that spareth his rod hateth his son: but he that loveth him chasteneth him betimes.”  This verse sums up everything the church believes in relation to discipline.

There are countless verses that the church used to encourage people to be hard workers and to avoid laziness and slothfulness. I don’t believe there is anything wrong with hard work itself. In fact, I believe it builds character. However, the church applied work as a punishment to rid a person of “meanness, rebellion, and stubbornness, etc.

These are just two examples of what the church might use to justify abuse. If you look at the testimonials of current members of the church, you’ll see that many of them touch on the idea of correction, but they never go in-depth because the actual means of correction are, without a doubt, child abuse.”

Following is a partial list of abuse that I endured while I was a member of the Church of Jesus Christ Forever in Oregon, Illinois. There were many instances of psychological abuse, but I’ve chosen to omit them from this list and focus on the physical abuse.

Over the past several weeks, it’s been suggested to me that the abuse was justified as a means of correction for my many shortcomings as a teenager. Without explicitly stating that I deserved it, members of the church AND non-members who side with the church have implied that I had many faults as a teenager for which the abuse was directed. For the record, not one member of the church has a degree in psychology, sociology, counseling, psychiatry, or any other level of mental health or behavioral studies. Additionally, Kale Aluli is the only person in the church with any formal biblical training.

It has taken courage and fortitude for ex-members to come forward with their testimonies. There are others who have done so anonymously. Everyone hopes these will also come forth publicly and lend their support to those who have already gone public.  An allegation with a real name attached to it carries ten-times the weight of an anonymous report. If and when these do come forward they will find a community of people who care about them and will support them.

Comments are welcome.  This website is a safe space for the abused. All comments are moderated. Current members of the Church of Jesus Christ will not be allowed to comment. They have their own website to speak from.  Any ex-members who wish to speak of their experiences are encouraged to do so.

I encourage you to comment on both the Facebook link to this page and also comment here. Facebook regularly removes posts about this subject and when they do all comments on that post are lost forever. For that reason I encourage you to place comments here also, for the comments placed here can never be removed by Facebook. Please scroll down to comment.