As horrible as the Second World War was, one of the blessings that came out of this evil is the rebirth of the nation of Israel. The geopolitical changes wrought by World War II made it possible for the Jews to retake their ancestral

The Face of Hate

homeland. Hitler’s ultimate goal of completely exterminating the Jews went unrealized. The Nazi regime was crushed and Hitler killed himself. But we must remember that the real struggle is not against man, but against the devil and his demons:

“For our struggle is not against flesh and blood, but against the rulers, against the powers, against the world forces of this darkness, against the spiritual forces of wickedness in the heavenly places.” (Ephesians 6:12) Though Hitler and the Nazis are gone, the demonic hoards that infested them have not died. They have merely moved on to a new host. Where have they gone? They went straight from the Nazis to the Muslims. The evil ideology of Hitler infected an infamous Muslim leader in 1941. Here is how it happened.

Grand Mufti[1] Haj Amin al-Husseini, the Mufti of Jerusalem collaborated with Adolf Hitler’s extermination of the Jews. Al-Husseini met with Hitler at a well-

documented meeting on November 25th, 1941. Hitler promised al-Husseini, the Palestinian pan-Arab leader, that after securing a dominant military position in Europe, he would send the Nazi war machine on a blitzkrieg into the Arab world to help him obliterate all the Jews in the land. In his book, Preachers of Hate, Kenneth Timmerman elaborates on the Nazi-Muslim connection:

In July 1937…the German minister of foreign affairs, Konstantin von Neurath, sent out instructions to German legations in Britain and the Middle East explaining the new directives of the Nazi leadership:

“The formation of a Jewish state or a Jewish-led political structure under British mandate is not in Germany’s interest, since a Palestinian state would not absorb world Jewry, but would create an additional position of power under international law for international Jewry, somewhat like the Vatican state for political Catholicism…Germany therefore has an interest in strengthening the Arab world as a counterweight against such a possible increase in power for world Jewry.”

Germany began broadcasting anti-Semitic propaganda in Arabic in the summer of 1938, fueling the passions of the mufti’s followers throughout the region. They planted anti-Semitic lies in the Arabic and Persian press and bred espionage and sabotage networks from the Persian Gulf to Palestine.

Hitler killed himself in 1945, but Al-Husseni continued to live until 1974. He spent his life becoming the Arabian father of the hate that modern Arabs have for the Jews. He was greatly admired by his nephew, terrorist Yasir Arafat[2], who continued the mission of destroying Israel. But Hitler was the true earthly father of modern anti-Semitism. Muslim terror is merely Nazism by another name, and its root cause is Satan’s desire to destroy the Jews because they are God’s chosen people.[3]

All of the Arab countries surrounding Israel are being swept up in a wave of revived Nazism. The Middle East Media Research Institute (MEMRI), which publishes its results at www.memri.org , specializes in reading Arab newspapers and translating them to English in order to provide “original analysis of political, ideological, intellectual, social, cultural, and religious trends in the Middle East.” Here are some pertinent observations made by MEMRI:

Mein Kampf, Hitler’s diatribe against the Jews is now on the best seller list in Turkey. The Turkish newspaper Vakit praised Hitler saying, “It is impossible not to admire the foresight of Adolph Hitler…[He] foresaw what would happen these [present] days. He cleansed off these swindler Jews…because he knew that they would become [this] big a curse for the world…The second man with foresight is evidently Osama bin Laden.”

The Egyptian government daily Al-Akhbar defends Hitler’s Holocaust: “The Zionists [Jews]…in Germany…betrayed the country that hosted them, in order to realize their aspirations…Hitler discovered that the Zionists were spies for the Allied Powers. Inevitably, he was enraged and took revenge on them for this great betrayal.”

President of Iran, Mahmoud Ahmadinejad has vowed that Iran would see to it that Israel is “wiped off the map.” He went on to say, “We cannot allow this fake regime of Israel to exist any more.” In response to the recent 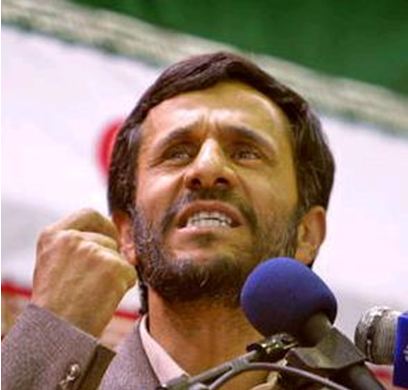 escalation between Israel and Lebanon, Ahmadinejad said in regard to America’s support of Israel, “If Israel’s supporters do not revise their support for the regime…they should know that this wrath will turn into a huge outburst, which will not be restricted to the region alone.”

Nazism, under the name of Islam is set on taking over the world again. On September 30, 1938 British Prime Minister Neville Chamberlain returned from meetings with Hitler proclaiming, “I have returned from Germany with peace for our time.” His naïve handling of Nazism led to the Second World War.

ISIS (Islamic State of Iraq and Syria) is taking over Iraq and threatens to eventually fly their flag even from the White House. President Obama responds by saying that ISIS is not a state and is not Islamic.

An Islamic terrorist recently beheaded a woman in Oklahoma while uttering Islamic oaths. He was a member of a mosque that is known to be fomenting terrorist acts on American soil. The Obama administration claimed it was only workplace violence and then Obama sent a letter to the terrorist’s mosque, commending them for their work. Obama, who is a secret Muslim himself, is the new Chamberlain and we may see World War III because of Obama’s naïve Pollyanna world view.

[1] The title of Grand Mufti refers to the highest official of religious law in a Sunni Muslim country. The Grand Mufti issues legal opinions and edicts.”

[3] For more information on this subject see the book: The Nazi Connection to Islamic Terrorism: Adolf Hitler and Haj Amin Al-Hussein, by Chuck Morse.