Although the Bible is recognized by Mormons as God’s word, it is with the caveat that it is God’s Word, only insofar as it is translated correctly. This effectively brings the whole Bible into question, for if you can’t believe parts of it, which parts? Thus the mind wonders, can I trust any of it? The result is that the Bible is not studied, read, trusted and believed as it should be.

The fact is, Jesus promised that his words would never pass away. If the Bible is corrupt, then Jesus lied when he said His words would not pass away, because that is the record of his words. But God has providentially preserved His Word and we do have accurate translations. Not only that, we have the scriptures in the original languages and we can compare any translation to the original.

The discovery of the Dead Sea Scrolls revealed a copy of the Old Testament one thousand years older than any in existence at that time. When that older copy was compared to the former oldest copy, guess how many copying or translation errors were found to have crept into the text over that one thousand years of time?  Virtually none! As the scripture says:

“The grass withers, the flower fades, but the word of our God stands forever.” (Isaiah 40:8)

Yes, today’s Holy Bible is an exact rendition of what the prophets and apostles wrote. It is accurate and it can be trusted. And the Holy Bible warns us over and over to beware of any teaching that is contrary to what it contains:

“Now I urge you, brethren, keep your eye on those who cause dissensions and hindrances contrary to the teaching which you learned, and turn away from them.” (Romans 16:17)

“I am amazed that you are so quickly deserting Him who called you by the grace of Christ, for a different gospel; which is really not another; only there are some who are disturbing you and want to distort the gospel of Christ. But even if we, or an angel from heaven, should preach to you a gospel contrary to what we have preached to you, he is to be accursed!” (Galatians 1:6-8)

“I testify to everyone who hears the words of the prophecy of this book: if anyone adds to them, God will add to him the plagues which are written in this book; and if anyone takes away from the words of the book of this prophecy, God will take away his part from the tree of life and from the holy city, which are written in this book.[1] (Revelation 22:18-19) But false prophets also arose among the people, just as there will also be false teachers among you, who will secretly introduce destructive heresies, even denying the Master who bought them, bringing swift destruction upon themselves.” (1 Peter 2:1)

“For false Christs and false prophets will arise and will show great signs and wonders, so as to mislead, if possible, even the elect.” (Matthew 24:24)

“Contend earnestly for the faith which was once for all handed down to the saints.” (Jude 1:3)

“Every word of God is tested…Do not add to His words or He will reprove you, and you will be proved a liar.” (Proverbs 30:5-6)

In direct violation of this, the Mormon Church puts the words of their prophets above those of the Holy Bible. As evidence of this I quote Ezra Taft Benson, the LDS 13th President and Prophet:

“The living prophet is more vital to us than the standard works.” [2]

The standard works of course include the Holy Bible. Benson elaborated on this point by reading from some Mormon history recorded in Conference Report, October 1897, pp. 18-­19. This is the quote Benson read:

“‘I will refer to a certain meeting I attended in the town of Kirtland in my early days. At that meeting some remarks were made that have been made here today, with regard to the living oracles and with regard to the written word of God. The same principle was presented, although not as extensively as it has been here, when a leading man in the Church got up and talked upon the subject, and said: “You have got the word of God before you here in the Bible, Book of Mormon, and Doctrine and Covenants; you have the written word of God, and you who give revelations should give revelations according to those books, as what is written in those books is the word of God. We should confine ourselves to them.’

When he concluded, Brother Joseph turned to Brother Brigham Young and said, ‘Brother Brigham, I want you to take the stand and tell us your views with regard to the living oracles and the written word of God.’ Brother Brigham took the stand, and he took the Bible, and laid it down; and he took the Book of Mormon, and laid it down; and he took the Book of Doctrine and Covenants, and laid it down before him, and he said: ‘There is the written word of God to us, concerning the work of God from the beginning of the world, almost, to our day. And now,’ said he, ‘when compared with the living oracles those books are nothing to me; those books do not convey the word of God direct to us now, as do the words of a Prophet or a man bearing the Holy Priesthood in our day and generation. I would rather have the living oracles than all the writing in the books.’ That was the course he pursued. When he was through, Brother Joseph said to the congregation: ‘Brother Brigham has told you the word of the Lord, and he has told you the truth.'”

Therefore, according to official Mormon dogma, whatever any LDS prophet says takes precedence over Holy Scripture. This is a very dangerous teaching and it has led to the LDS Church adopting many unbiblical ideas.

To leave a comment, please scroll to the bottom. 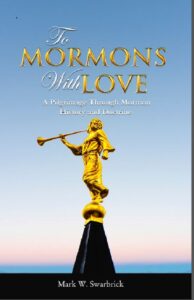 My book, To Mormons with Love explores the history and false teachings of Mormonism.  Click the image for more information and to purchase. Only $8.99 on Kindle.

More books by Pastor Mark Swarbrick, click the image below…

[1] Mormons argue this only applies to the book of Revelation. However it is no accident, but rather it is divine providence, that the books of the Bible are bound together with Revelation at the end. Furthermore, if it is sinful and punishable to add or detract from one book of the Bible, would not the other books be just as sacred and unalterable?  Finally, similar commands are found elsewhere in the Bible to teach nothing contrary to God’s written word; thus the principle applies across the board to the entire Bible.

[2] Fourteen Fundamentals in Following the Prophet, by Ezra Taft Benson – A devotional address given at Brigham Young University on 26 February 1980. Available at: http://speeches.byu.edu/reader/reader.php?id=6751 Accessed 2 January 2009