Curious about Mormon vs Christian beliefs?  Are you are a Mormon or thinking of becoming one? 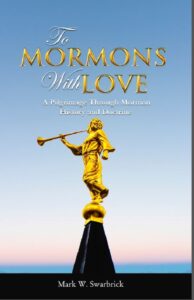 Are you wondering, how does Mormonism differ from Christianity? If you are curious about Mormon vs Christian beliefs this book was written for you! Within these pages the reader is taken on a spiritual journey through the history of Mormonism, particularly the early tumultuous days of Joseph Smith and Brigham Young.

Not an Anti-Mormon Rant: The author has thoroughly researched the early beginnings of the LDS Church and its founding prophets. From old newspapers, military and government reports, diaries and first-hand accounts the author has gleaned many little-known facts of Mormon history and assembled them into a fascinating account of the violent and incredible birth and growth of the Mormon Church of the 1800s. This writing, while brutally honest, is also both loving and kind. This is not an anti-Mormon rant, but a thoughtful analysis of Mormonism in the light of the Holy Bible and historic Christian doctrine. This is the perfect handbook for Mormon vs Christian theology.

An Enthralling Page-Turner: This book is a fascinating account which brings to light the real reason the Mormon Prophet Joseph Smith was killed, how Brigham Young succeeded him as prophet and what led to the infamous Mountain Meadows Massacre. This book’s description of the fierce battle between the Mormon army and the militias of Illinois, set against the background of murder and rage surrounding the Mormon community of Nauvoo, makes this book anything but a dry theological treatise.

The Bible versus Mormonism: The life and times of the Mormon prophets are examined according to the prescription given in the Holy Bible for testing prophets. The doctrines and practices of Mormonism are considered in the light of Jesus’ teachings.  Mormon vs Christian teaching is carefully examined. The author’s conclusion challenges Mormons to reconsider the foundations of their faith, while encouraging them towards a closer walk with the Jesus of the Holy Bible.

If you have family or friends who are Mormon or even contemplating Mormonism, then you need to give them this book. Click  BUY NOW  to purchase from Amazon.

Back to Books by Mark Swarbrick