How can you tell that a ministry is a cult? Of course the main way is to determine whether or not they deny the foundational doctrines of Christianity. This is not always a simple task since cults tend to obfuscate their true teachings. Below I delineate four other warning signs that can be used to discern the cultic nature of a group. They are: 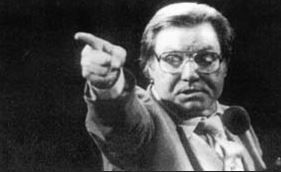 Jimmy Swaggart Ministries aka Sonlife Broadcasting Network (SBN) fails every one of these four tests. Point 1: Jimmy Swaggart, the founder of the ministry, is revered as a most anointed holy prophet of God. Point 2: They constantly uplift themselves to the point of detracting from the Lord Jesus Christ. Point 3: they have added themselves to the list of Bible-Plus cults, teaching that you need their material plus the Bible and without their material you simply will not get the fullness of the Gospel. Point 4: They continually condemn all other churches except those affiliated with their ministry.

Want the proof? Here is a clip of Jimmy Swaggart speaking on May 11th, 2015. In this short 3-minute clip you will see clear evidence of points 2 & 3; They exalt their own ministry and claim that one of the most fundamental teachings of Christianity cannot be found anywhere, except in their ministry. You won’t get it from a Christian book, a preacher, or even from the Bible; you can only get it from them. That is what they say and here is the proof.

Now that you’ve seen the clip, let’s review. Whenever Jimmy is going to make an outrageously untrue or unscriptural claim, he invariably struggles to get it out, as though he is fighting his own conscience, kicking against the goads; he will stutter, admit he has trouble saying it or is hesitant to say it, and decry that it may make people mad, but then he goes on anyway and says it.

Once he takes the leap, he throws himself into it passionately, and about this I must make an important point: He who is himself deceived is the most dangerous and convincing of all deceivers. The self-deceived truly believes his own lies; thus he is enabled to eloquently and passionately present his material in such a self-assured manner that the subjects capacity for critical analysis is overwhelmed by the emotion and charisma of the deceiver. The thought, “If he believes it so strongly, surely it is so” short-circuits his thinking, not realizing that “vehemence equals truth,” is a faulty equation.

Swaggart’s statements in this clip are so outlandish I think it good to review in print what he said. Here is the transcript of his rambling statement:

And of course there is still a lot more of course there is to be said, but this is the single most important material for the believer to know and understand. And you consider that, and consider that there isn’t anyone out there, like I said to my knowledge, other than those who have tuned in this ministry, who even know what you’re talking about.

They’ve never heard a message on the sin nature, They’ve never had their pastor to teach on it and its, I know coming up in church, and the pastor that was the pastor of our church was a godly brother, he loved the Lord very much, but at every, I mentioned this the other day, whenever Frances and I went into evangelistic work, every city that we went into, we went into scores, over twenty years of time, I would go to the used book store and I would look for books by some of the great Bible scholars of the past and great preachers of the past and I bought hundreds and hundreds through the years, and read all of them, I never read one single message – by some of the greatest Baptist preachers who ever lived, Methodists who ever lived, Pentecostal, etcetera, etcetera – never read one message, not one single time, on this all important subject.”

Then the other minister chimes in…

“I’m sorry, can I make this statement? You said that earlier…you doubt that as a church, anywhere out there, outside of the influence of SBN, that this message of the sin nature has been preached. I too have never heard of any message regarding the sin nature until this revelation was given to you.”

To summarize, Jimmy says that his special revelation on the sin nature, what he also calls the Message of the Cross, is “ the single most important material for the believer to know and understand.” and that no other Christian knows it or has ever known it without it first coming through Jimmy Swaggart. No book, no theologian, no pastor, nobody anywhere knows this. Jimmy claims that he never ever heard teaching on the sin nature, not even from his own pastor. How incredible that he spent his life in church, yet never heard this basic Christian teaching!

It begs the question, if this is the most important doctrine of Christianity, how is it that none of the great theologians of Church history know about it? If it is the single most important doctrine of the faith, would not every Bible-reading Christian know it from the Word of God? Apparently not, according to Jimmy Swaggart. Why? Because Jimmy Swaggart Ministries herein clearly teaches that the Bible alone is not enough. You need Jimmy’s special revelation to go with it. And that is a clear mark of cultism.

As is typical, he leaves himself an out of “to my knowledge,” but that does not excuse the incredulity and audacity of his foolish claim. I think every Christian realizes, if he stops to think about it, that the teaching of the sin nature is everywhere taught in Christendom. Its in the Bible: Adam sinned, we inherited a sinful nature, but when we are saved and born again, we have a Christ nature that wars against the sin nature (also called the flesh in Scripture) and helps us win victories, as we “fight the good fight” and endeavor to persevere and “walk after the Spirit and not after the flesh.” Romans Chapters 7 & 8 are all about this.

Despite Swaggart’s claim that he found no teaching on the sin nature in “hundreds and hundreds” of Christian books, I did a quick search of the ubiquitous Matthew Henry commentary and found: “Because all had from him (Adam) the same sinful nature…”[1] A commentary that is on the shelf of probably every pastor in the country has teaching on the sin nature. How did he not see it?

And in my Bible, the heading for Roman 7:14 in the NASB is, “The Conflict of the Two Natures.”

The Encyclopedia Wikipedia under the subject Original Sin says:

“Original Sin…is the Christian doctrine of humanity’s state of sin resulting from the fall of man, stemming from Adam’s rebellion in Eden. This condition has been…referred to as a ‘sin nature…'”

I have been taught about the sin nature constantly, having heard it in many sermons and Sunday School classes. Even the book that Swaggart loves to hate, The Purpose Driven Life, has teaching on the sin nature, saying “The Bible says that selfish thinking is the source of sinful behavior: ‘Those who live following their sinful selves think only about things that their sinful selves want.'” [2]

The evidence has been heard and the verdict is in: Jimmy Swaggart Ministries propagates the lie that they, and they alone, have the “single most important material for the believer to know and understand.” In so doing they exalt themselves and their ministry as the only way to know the fundamental truth of the Gospel. Such self-exaltation can only happen at the expense of demoting the position which belongs only to Christ. Knowing Jesus Christ is the single most important subject of Christendom, not Jimmy’s supposed revelation. Jimmy Swaggart Ministries is promoting itself far more than Jesus and exaltation of a ministry above Jesus is a form of idolatry.

Jimmy Swaggart Ministries fails all four tests for cultism: One, they lift up Jimmy Swaggart as their prophet and pope. Two, They lift up Jimmy more than Jesus. Everything revolves around him and his revelation. Three, they are a Bible-Plus group – you need the Bible PLUS Jimmy’s revelation – just like all other cults. and four, they condemn all other ministries or churches as apostate and of the devil.[3]

This is not to say that those who attend Jimmy Swaggart’s church or follow him in any way are necessarily not saved. It is to say that his ministry has strong cultic tendencies and is not recommended by many cult-watch groups. The teaching of JSM is dangerous. It can hinder a Christian’s maturity and growth and may lead them out of their local church and into the nefarious and deceptive maze of cultism.