When I got saved I believed in evolution. I continued to believe in evolution for several years after I became a Christian. I had no idea that I had been brainwashed my entire life. From the time I was a little boy it had been implanted in my mind that the earth was billions of years old and that dinosaurs lived millions of years before man evolved from a monkey’s uncle, and that before there was life on earth, it rained on the rocks for millions of years and created a pre-biotic soup from which accidentally sprang the first single cell creature.

As I grew up and became a teenager, I didn’t think too hard about the idea that I had evolved from a rock. There were more interesting things to compete for my attention, like fast cars and pretty girls. But the years of brainwashing had put these ideas into my head and I had no idea the problems they would cause me later. 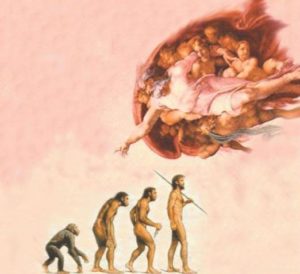 There were certain problems created by what the Bible said. I had to come up with some theories to deal with them. I soon realized that the creation story in Genesis could not be literal history. It couldn’t be, for it said that God created the earth and the animals in six days.

I tried to believe the day-age theory, that they were just six periods of time, millions of years long. But I didn’t find that intellectually satisfying, for the Bible clearly said, “there was evening and there was morning, the first day.” So it was clear the context was talking about 24 hour days. Besides that, the Genesis account has God creating the plants a day before he makes the sun. If each day is millions of years, then how did those plants get by without the sun for all that time?

Would I have to discard the creation story as fiction? I concluded that there must be some parts of the Old Testament that were not really the inerrant Word of God. But, surely, I told myself, the New Testament is all factual. But then I read this:

So the New Testament says Adam was “the first man.” Hmmm. Now what. Ok, so Adam must have been the first modern man that evolved from some kind of ape-creature millions of years ago. But then I ran into the genealogy of Jesus, which I show below, but using the ellipses instead of putting in all the names, as they take up most of a page. You can look it up yourself and see that each person from Jesus back to Adam is listed. 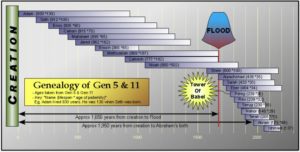 It doesn’t take a genius to realize that the genealogy of Jesus does not cover millions of years. More like about 4,000 years. I also saw that the genealogies in Genesis 5 and 11 show around 2,000 years from Adam to Abraham and Matthew 1:17 tells us there were 42 generations from Abraham to Jesus. Add a couple more millenniums to get us to today. No matter how you do the math, there is no room for evolution’s millions of years. According to scripture, the earth is around 6,000 years old.

I had to manufacture some kind of theory to make all this fit evolution and millions of years. The first man could not have lived only 4,000 years before Jesus. I began to see that if the creation story in Genesis is not real then multiple problems are created. If Adam was not real, and he is listed as an ancestor of Jesus, then where do I draw the line? Was Jesus real? Was his mother real? Was King David real? The genealogy only makes sense if you believe it all. It made my head hurt to think about it.

Maybe, I reasoned, perhaps the history of Jesus’ ancestors doesn’t matter just so long as I believe in the words of Jesus. But then I read where Jesus said this:

Whoa! Abel was the son of Adam and Jesus says that Abel lived at “the beginning of the world,” and that God made man at “the beginning of creation,” not billions of years later! I quickly found myself in the uncomfortable position of having either to believe that Jesus didn’t know what he was talking about or having to totally discard evolution. I was prepared to do neither.

Then I came upon this:

“Sin entered the world through one man, and death through sin, and in this way death came to all people…” (Romans 5:12)

Another serious problem. The New Testament was telling me that there was no death until Adam sinned. I knew that the theory of evolution depended upon animals killing and eating each other for millions of years so that natural selection could work through the principle of the survival of the fittest. Evolution says that death brought man into the world, but the Bible was telling me that it was the opposite, that it is man that brought death to the world.

Evolution and the Bible were telling me completely opposite doctrines. The scripture said God made everything perfect and called it good and that man ruined it by sin, that we inherited a sinful nature from Adam and that’s why Jesus came to die for our sins.

Evolution was suggesting that God made everything ruined to start with, that death and suffering were his idea and that man was evolving and getting better and smarter. So what need was there then for a savior? Evolution was forcing me to have a low view of scripture, but when I read Jesus’ words, I found he had a very high view of scripture. He quoted it as absolute truth continually. My very faith in Jesus was under assault.

Gradually I began to lose my confidence in the Bible. I just could not trust what it said, not even in the New Testament, not even the very words of Jesus. Those words disagreed with “science,” or what I had been taught was science. My faith began to falter and weaken. I still believed in Jesus, but doubts about everything were creeping into my mind. I no longer had total confidence in things I would read in the scripture.

Then one day I had an epiphany. We lived in Silver City, New Mexico. The pastor announced that in the Sunday evening service we would have a guest speaker. He was a high school science teacher that was going to come and speak to us about evolution and the Bible.

I was determined not to miss that! Maybe he would have some theory that would reconcile the scriptures with evolution! Actually, he was about to rock my world. What I heard that evening blew my mind. That is when I realized that I had been brainwashed all of my life. 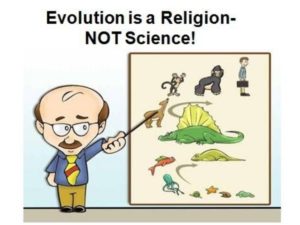 I found out that evolution was not science! He presented one scientific fact after another that totally disproved the evolutionary theory. He spoke of how Louis Pasteur had disproved spontaneous generation in 1859, which established the scientific Law of Biogenesis, that life cannot spring from non-life. I learned about the law of cause and effect, that you cannot have a complex written code within DNA without an intelligent author.

I was shown the irreducible complexity of a single cell and learned the mathematic impossibility for such a thing to have evolved by accident. I was told of the Second Law of Thermodynamics, which is evidenced by everything in the universe running down and losing energy and complexity, not the opposite, which evolution requires. I found out that beneficial genetic mutations, which evolution claims were the mechanism of evolution, are extremely rare if not non-existent all together. 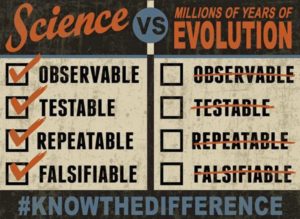 I began to understand that real science was based upon observation and repeatable experiments and that there really was no real scientific evidence for evolution that could be observed or tested. No one had ever seen one animal turn into another kind of animal, not once, not ever. He told us about the unreliability of radiometric dating and the fallacious circular reasoning used by evolutionists when they date the fossils by the rock layers and then date the rock layers by the fossils. Never in school had I been taught the truth that it takes rapid burial in a flood for a fossil to be created and that fossils were not a record in time of millions of years but were all created in the flood of Noah. I had been deceived by a world-wide mass conspiracy!

As I learned of all the frauds and faked evidence of evolution that had been exposed and proven false I was amazed. Evolutionary scientists, were so eager to prove evolution that they even created fake skulls and lied about where they found bones. They printed lies in text books, even after what they postulated had long ago been exposed as a fraud. I began to realize, they were not pushing true science, but were brainwashing people with satanic lies which they believed and to which they had blindly committed themselves. 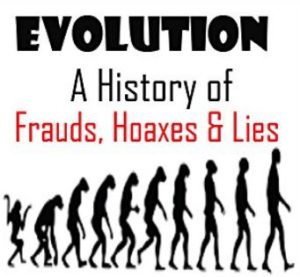 After I learned the truth about evolution, I found my faith was growing by leaps and bounds. Scripture says that faith comes by hearing and hearing by the Word of God. Finally, I was able to read the Bible and believe every single word of it. It truly is God’s infallible inerrant word, every single part of it.

Since then I have found many people who have numerous doubts and weak faith all because they have swallowed the lie of evolution. Many are atheists simply because they believe in evolution. Today the religion of evolution is taught in our public schools, not as a theory, but as though it were a scientific fact. If your kids are in public school, know that they are being lied to and brainwashed. 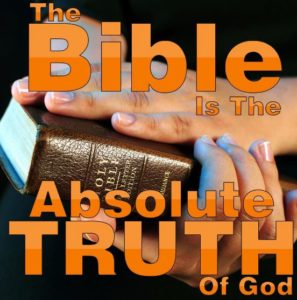 We must let our children know that every time they hear “millions of years,” that they are being lied to by the priests and priestesses of the religion of evolution. We need to give them real science and real truth so that Satan cannot steal away their faith in the Holy Bible.

I have written a book on the subject of theistic evolution. It is available from Amazon. You can get it here: