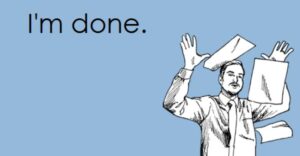 I have had it! I quit. I am done! I am absolutely, totally, and one-hundred percent fed up with the Republican Party! I don’t want to be associated with a party that is full of traitors, cowards, and backstabbers. There are some good folks in that party, but the leadership is rotten to the core. If they can’t keep RINOS out of their midst, what good are they? The last straw was Mitch McConnell’s speech to the Senate after Trump’s acquittal. As Republican Minority Leader of the Senate, he should be backing our former president. Instead, he blasted Trump for being an insurrectionist. He blamed him for everything that happened on January 6th. He accused him of spreading lies, innuendo, and conspiracy theories because he said that the election was stolen. He said that caused the incursion into the Capitol Building.

President Trump did not incite anybody to do anything but peacefully gather, as the Constitution allows. The straight facts are that the election was stolen. Rudy Giuliani and his team proved that beyond a shadow of a doubt, and anyone who spent that week listening to all the testimony knows that is true.

So I suppose McConnell thinks Giuliani is an insurrectionist nut-case. Giuliani, who is known as “America’s Mayor” because of how well he took care of New York City, the man who was former United States Associate Attorney General and was United States Attorney for the Southern District of New York from 1983 to 1989 – this man is supposed to be a conspiracy theorist. I beg your pardon – Giuliani is a level-headed attorney who has the facts. McConnell is the one bandying about the Democratic Party’s conspiracy theory that the election was not stolen! Yet now, Giuliani, an esteemed patriot, is considered by McConnell to be a conspiracy theorist? To quote our current demented dictator, “Give me a break!”

China Biden can take bribes from Ukraine, China and Russia, and brag about it and get caught, and McConnel has nothing to say about that. The Democrats steal an election and that’s okay. But Trump asks his people “to peacefully make your voices heard,” and that is a crime? I am so disgusted with the Republican Party.

Here is what I am going to do. I will consider another party. I advocate that we have a Convention of States as delineated in Article Five of the U.S. Constitution. This would allow the states to create new amendments to the Constitution that, among other things, would set term limits that would oust a RINO traitor like McConnell, who has been in the Senate for thirty years. Our founders never intended there to be lifetime career politicians in Congress. McConnell should have retired long ago. He has been there so long he is not aware of what is going on in the world. It is time we put an end to that. Term limits would get rid of McConnell and his kind and possibly redeem the Republican Party. It would also remove people in the Democratic Party that need to go, such as Nancy Pelosi.

If you are interested in helping, go to www.ConventionOfStates.com