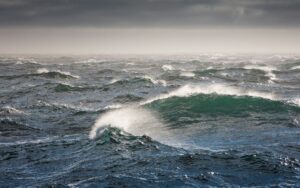 Horatio Spafford was a prominent and successful lawyer in 1871, that is, until the infamous Chicago fire destroyed most of his holdings and investments. He decided to take some time off with his family and go to Europe for a couple of months to recoup emotionally. At the last moment an urgent business need arose that he had to attend to, so he sent the family ahead and said he would catch the next ship.

As Horatio struggled with the hardship of losing his material possessions, he had no idea that more tragedy lay ahead. The ship carrying his family sank. Although his wife survived, his four daughters drowned.

A few weeks later, he boarded a ship for the long and lonely journey to join his wife in Europe. When his ship was crossing the area where the previous ship went down, the captain told Horatio, “This is the place where you lost your daughters.”

In deep melancholy, he stood alone at the railing of the ship and gazed out over the ocean where his precious daughters had perished. But Horatio was not really alone, for the Spirit of Christ, whom he walked with daily, was ministering to him.

He looked out over the billowing waves of the sea and thought about how sorrow had washed over his life like wild waves of the sea. He was a man who grieved, and grieved deeply, but not as one who had no hope. As the Lord ministered to his heart, a song began to grow in his spirit. His unfathomable sorrow slowly began to be assuaged by a river of peace. He took pen to paper and wrote down the lyrics of what would become one of the most famous songs of Christendom:

When the hard knocks of life strike their merciless blows, our Savior, the God of all comfort and hope, will take our hand and see us through. As we walk with God, Jesus takes all our hurts and disappointments and turns them into a beautiful song that will resound for all eternity. He turns our tragedy into beauty, and our sorrow into song.