Why isn’t America mentioned in the Bible, or is it? America, world super power, best ally of Israel, Christian nation that evangelizes the world – why would we not be in the Bible?

To help us see things in perspective, we must realize that our nation is not yet even 250 years old. Biblical history covers the last 6,000 years. We are a very young country. If we are going to find America mentioned at all in scripture, it is going to be in the prophecies concerning Israel in the very end times. Bible prophecy speaks of Israel being surrounded and attacked by many nations in the last days. Surely America, Israel’s ally, would come to her defense. So then, if we are going to find mention of America, we would find it in the last days prophecies. 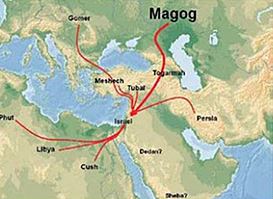 The prophecy of Ezekiel Chapter 38 is one such prophecy. You might want to read Ezekiel Chapters 38 and 39 before continuing with this article. It is predicted that Russia, Iran and other Muslim nations invade Israel in the last days in order to “capture spoil and to seize plunder.” (Ezekiel 38:12) The attack is an overwhelming ground attack:

“You will come like a storm; you will be like a cloud covering the land, you and all your troops, and many peoples with you.” (Ezekiel 38:9)

The Stage is Set

What plunder? What does Israel have that someone would want? The recent discovery of natural gas in Israel, enough to last over 100 years, plus the massive deposits of shale oil discovered in the Golan Heights, is destined, according to Fox News, to turn Israel into an energy super power. 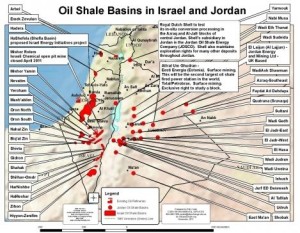 This metamorphosis of Israel from an energy poor country, to being a major player as an oil and gas export country, is a game changer. It sets the stage for the prophesied attack upon Israel in order to plunder her energy reserves. Muslim nations are already chomping at the bit to destroy Israel. Russia has cozied up to Iran and now Israel has what everyone wants. All the players are in position, exactly as God’s Word predicted. The time for the fulfillment of the Ezekiel prophecy may be imminent.

This future attack upon Israel is exactly where we would expect to see America coming to Israel’s defense. Yet strange as it is, scripture records that no one comes to Israel’s aid. Instead, God himself stops the attack by miraculously raining hailstones, fire and brimstone out of heaven onto the attacking hordes.

Why is America not coming to Israel’s defense in that scenario? There are some interesting passages that gives us a clue. Here they are:

“And I will turn you about, and put hooks into your jaws, and I will bring you out, and all your army, horses and horsemen, all of them splendidly attired, a great company with buckler and shield, all of them wielding swords… And you will come from your place out of the remote parts of the north, you and many peoples with you, all of them riding on horses, a great assembly and a mighty army…” (Ezekiel 38:4,15) 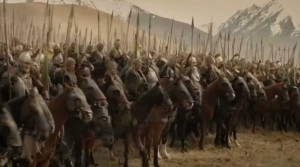 What kind of modern army rides horses? Its not just some of them on horses, which might be expected. It says, “all of them riding horses.” Why not tanks, planes and armored personnel carriers? We know these are literal horses because after the attack God commands the birds and wild animals to eat the dead horses. Birds and animals can’t eat a tank:

Speak to every kind of bird and to every beast of the field, “Assemble and come… you will be glutted at My table with horses…” (Ezekiel 39:17,20)

Here is another curious passage full of mysteries:

“I will strike your bow from your left hand and dash down your arrows from your right hand. You will fall on the mountains of Israel, you and all your troops and the peoples who are with you… Then those who inhabit the cities of Israel will go out and make fires with the weapons and burn them, both shields and bucklers, bows and arrows, war clubs and spears, and for seven years they will make fires of them. They will not take wood from the field or gather firewood from the forests, for they will make fires with the weapons…” (Ezekiel 39:3-4,9-10)

Some believe the reference to bows and arrows in not literal, but in this case, it must be, for you cannot burn an AK-47 in your fireplace. This passage says that instead of heating their homes and cooking their food with firewood from the forest, they will burn the weapons instead.

The curious thing is this: Israel is a modern technological society. Why is the main populace of Israel heating and cooking with wood instead of electricity, gas or oil? The passage clearly says that they stop gathering their firewood from field and forest in order to use the weapons for fuel. So why, we must ask, were they using wood from the forest as a main energy source in the first place?

Along with that question is another: Why are the attackers using archaic weapons. It specifically lists, “shields and bucklers, bows and arrows, war clubs and spears…” Why not tanks, missiles and automatic weapons? 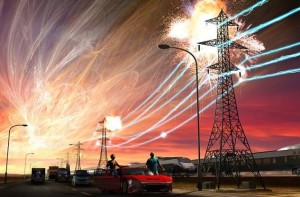 I believe the answer is summed up in one word: EMP. Electro-Magnetic Pulse. When a nuclear weapon is exploded above a country, out in space at an altitude between 40 to 300 miles, it emits a pulse of gamma rays that create an electromagnetic pulse that wipes out all solid-state electronics, along with the entire electrical grid. This instantly reduces a country to the dark ages. According to a study done by the U.S. government, if this happened to America, it would take years to restore power and nine out of ten Americans would die from starvation, thirst and disease.

I believe this is why Israel is burning wood for fuel. They have been hit with an EMP. There is no electricity in Israel at the time of this attack. Also, the countries attacking have been hit. Israel is a nuclear power. No doubt their nuclear missiles are hardened against EMP. They would retaliate with an EMP of their own against their enemy. This is why we find the attackers using bows and arrows.

After an EMP strike, all manufacturing and shipping comes to a halt and stays halted for years. Factories are dead and trucks, trains and planes are fried. No one is making ammunition and what they have can’t be shipped. That’s why they are using archaic wooden weapons. The modern nuclear age makes all the strange predictions in the Ezekiel prophecy make sense. A nuclear EMP exchange explains why Israel is burning wood and why the attackers are using wooden weapons and that’s why they are “all” riding horses.

The same type of attack that reduced Israel to burning wood has most likely done the same to America. America has suffered an EMP attack and is so busy trying to survive she cannot possibly defend anyone. For those who are not familiar with the horrors of an EMP attack, suffice it to say that no automobiles work, no electronic devices function, and their is no electricity.

Since it takes years to replace the destroyed power transformers, this situation goes on for a long time. Without factories and transportation, food shortages are epic. Our modern non-agrarian society, cannot support the current population of the United States. Without water purification and sewage plants operating, cities quickly become death traps.

Although our electric grid could easily be hardened against EMP attack, our leaders refuse to do so. Sin blinds a nation. With America drifting away from God, our leaders are blinded to the imminent danger and ignore all the cries from specialists warning us of the danger.

Of course, America would quickly retaliate in kind against anyone who attacked with an EMP, but that would not save us. Mutually Assured Destruction (MAD) is the only thing stopping such an attack. However there are some enemies that are not deterred by MAD.

Who Could Defeat America?

Iran is one such example. They love death and destruction. The Islamic religion teaches that they must bring on holocaust in order for their 12th Imam or Mahdi to arrive and usher in universal Islam. When they cry “death to America, death to Israel,” they are doing so as part of their religious end-time world view. They don’t care if their country is attacked. Their Mahdi will save them, or so they believe. 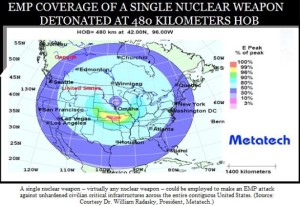 Furthermore, an EMP can be launched anonymously. A cargo ship off our coast in international waters, or somewhere in the Gulf of Mexico, could launch a simple missile capable of an EMP attack. We would never know who hit us.

Iran recently has been practicing launching missiles from cargo ships with a trajectory perfect for an EMP attack. On any given day at least one cargo container ship from North Korea or Iran is traveling in international waters along the United States coastline. North Korea also has a satellite orbiting over America every day that is at a perfect height for an EMP burst. Whether or not there is a nuclear device inside that satellite, we don’t know. 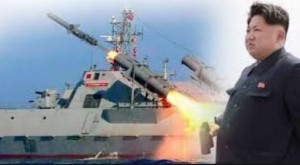 North Korea’s April 29th missile test has all the earmarks of a practice EMP attack. The missile was fired on a lofted trajectory, to maximize, height, not range, climbing to high-altitude as quickly as possible, where it was successfully detonated — the exact scenario of an EMP attack.

The optimum altitude for a 10 kiloton EMP warhead is 44.7 miles. Korea’s missile was detonated at an exact altitude of 44.7 miles. Korea has said they intend to reduce American to “ashes and darkness.” It looks like they mean it.

The prerequisites for this prophecy in Ezekiel to be fulfilled are all in place. EMP weapons make the use of bows and arrows, horses and swords, in a future war a possibility. Israel’s recent acquisition of huge oil and gas reserves make them a delicious target for her enemies. The vulnerability of America to EMP, our governments strange refusal to harden our electric grid, the threats from Iran and North Korea that they intend to use EMP on us, and the absence of the mention of America in this prophecy, combine to tell us something ominous may be in store for America, and its imminent.

Does the Ezekiel attack, and its horrible EMP devastation, happen before or after the Rapture? Good question. We certainly hope it is after, but that is a subject for another article. Stay tuned.