America. Who are we? What is our legacy? President John F. Kennedy summed it up well in his Inaugural Address, given Friday, January 20, 1961:

“For I have sworn before you and Almighty God the same solemn oath our forebears prescribed nearly a century and three quarters ago. The world is very different now. For man holds in his mortal hands the power to abolish all 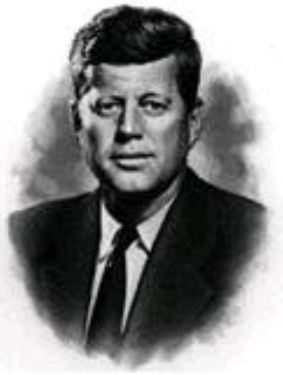 forms of human poverty and all forms of human life. And yet the same revolutionary beliefs for which our forebears fought are still at issue around the globe—the belief that the rights of man come not from the generosity of the state, but from the hand of God.

We dare not forget today that we are the heirs of that first revolution. Let the word go forth from this time and place, to friend and foe alike, that the torch has been passed to a new generation of Americans—born in this century, tempered by war, disciplined by a hard and bitter peace, proud of our ancient heritage—and unwilling to witness or permit the slow undoing of those human rights to which this Nation has always been committed, and to which we are committed today at home and around the world.

Let every nation know, whether it wishes us well or ill, that we shall pay any price, bear any burden, meet any hardship, support any friend, oppose any foe, in order to assure the survival and the success of liberty. This much we pledge—and more.

To those old allies whose cultural and spiritual origins we share, we pledge the loyalty of faithful friends…But this peaceful revolution of hope cannot become the prey of hostile powers…Finally, to those nations who would make themselves our adversary, we offer not a pledge but a request: that both sides begin anew the quest for peace, before the dark powers of destruction unleashed by science engulf all humanity in planned or accidental self-destruction.

We dare not tempt them with weakness. For only when our arms are sufficient beyond doubt can we be certain beyond doubt that they will never be employed…In your hands, my fellow citizens, more than in mine, will rest the final success or failure of our course. Since this country was founded, each generation of Americans has been summoned to give testimony to its national loyalty.

The graves of young Americans who answered the call to service surround the globe.  Now the trumpet summons us again—not as a call to bear arms, though arms we need; not as a call to battle, though embattled we are—but a call to bear the burden of a long twilight struggle, year in and year out, “rejoicing in hope, patient in tribulation”—a struggle against the common enemies of man: tyranny, poverty, disease, and war itself.

Can we forge against these enemies a grand and global alliance, North and South, East and West, that can assure a more fruitful life for all mankind? Will you join in that historic effort? In the long history of the world, only a few generations have been granted the role of defending freedom in its hour of maximum danger. I do not shrink from this responsibility—I welcome it. I do not believe that any of us would exchange places with any other people or any other generation. The energy, the faith, the devotion which we bring to this endeavor will light our country and all who serve it—and the glow from that fire can truly light the world.

And so, my fellow Americans: ask not what your country can do for you—ask what you can do for your country. My fellow citizens of the world: ask not what America will do for you, but what together we can do for the freedom of man. Finally, whether you are citizens of America or citizens of the world, ask of us the same high standards of strength and sacrifice which we ask of you. With a good conscience our only sure reward, with history the final judge of our deeds, let us go forth to lead the land we love, asking His blessing and His help, but knowing that here on earth God’s work must truly be our own.” [1]

What a heritage we have to be proud of! Oh that we could have a president again that had such a soul for American goodness! Let us pray earnestly for that! Pray that we stop this slide into moral decay and decadence that is robbing America of her soul and leading us to destruction.

Some countries have a history of making war and of being a problem for the world. Other countries struggle merely to survive and feed their people. America, on the other hand, has a history of helping and feeding other countries, standing up to tyrants and regimes that would steal and murder, and defending freedom at home and abroad. Now let me draw your attention to an important statement contained herein. President Kennedy said that Americans are:

“…unwilling to witness or permit the slow undoing of those human rights to which this Nation has always been committed, and to which we are committed today at home and around the world. Let every nation know, whether it wishes us well or ill, that we shall pay any price, bear any burden, meet any hardship, support any friend, oppose any foe, in order to assure the survival and the success of liberty.”

This is in large part who America is. This is what we do. We must not let this moral fortitude that has kept us great slip from our grasp! Preachers must use their pulpit to warn America of the dangers of apathy! When America ceases to be good she will cease to be great! We must defend freedom “around the world,” and we should “pay any price” to do it. That’s why we went to Iraq. We liberated 25,000 people and put an end to Saddam’s rape rooms and torture chambers.  We liberated another 25,000 people that were under the repressive rule of the Taliban in Afghanistan. Defending freedom has been the business of America. We must continue in that. Hear the Word of God:

“Deliver them that are drawn unto death, and those that are ready to be slain; If thou sayest, Behold, we knew it not; doth not he that pondereth the heart consider it? and he that keepeth thy soul, doth not he know it? and shall not he render to every man according to his works?” (Proverbs 20:11-12)

For such a reason we have always supported Israel. Israel is a peaceful democracy, a land of freedom, surrounded by dictatorships and fascist regimes that are bent upon war and world domination. It has been rightly said in reference to the middle-east conflict, that if the Muslim terrorists threw down their weapons, there would be no more war, but if Israel were to throw down her weapons, there would be no more Israel. We must stand with Israel because America stands for freedom and democracy and opposes tyranny, racism and oppression.

Unfortunately the liberals, the unsaved, the secularists and the atheists do not know who America is. They do not identify with the Judeo-Christian roots [2], ethics, and morals of our great nation. All the more reason that Christians must understand these things with crystal clear clarity.

[1] This is an excerpt. You can read the entire speech here: http://www.bartleby.com/124/pres56.html